Enjoy The First Universe In Flames by @kalliasx for just #99cents! #ASMSG #RPBP 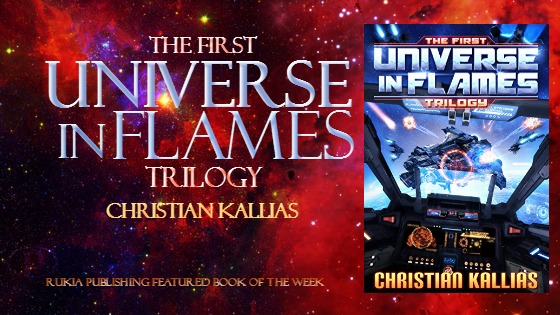 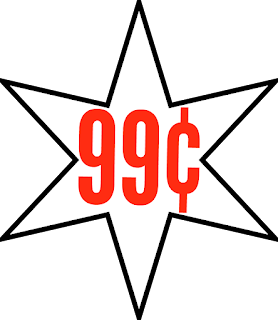 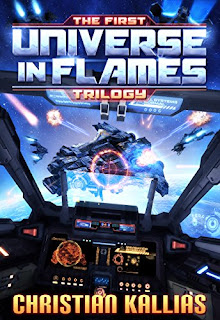 ​
I am Fury. Evil has followed me to Earth. I shall Protect this World until my Dying Breath.
When the Obsidian Empire obliterates the Star Alliance with the help of the Zarlacks, an old evil race long thought extinct, the universe is set ablaze. The last survivors are forced to make a blind jump beyond the outer reach of the charted universe, to a world teeming with life: Earth. The fleet's arrival inadvertently alerts their enemies to the presence of sentient life in that part of space, resulting in a swift and devastating invasion of the blue marble.

Under the guidance of the Olympian goddess of Love, Aphroditis, Lieutenant Chase Athanatos learns of his origins and must race against time in a daring attempt to save Earth, their Last Sanctuary.

With Earth now thrown at the center of the conflict, the newly formed Earth Alliance struggles to keep the enemy at bay. Desperately outnumbered, Chase and his friends must wage one battle after another while seeking new allies to survive.
When it becomes clear that his Fury powers are awakening, Chase must face his inner demons and learn to control them or he could very well destroy the universe he has sworn to protect. Can his Fury heritage and unwavering determination hold the key to change the course of everyone's destiny?

The Trilogy edition contains the first 3 books of the Universe in Flames saga: Earth - Last Sanctuary, Fury to the Stars and Destination Oblivion in one eBook. This version contains the latest edits and proofreads from the series with a new cover.
http://bit.ly/1stUniverseSetfbtw

Included in The Trilogy 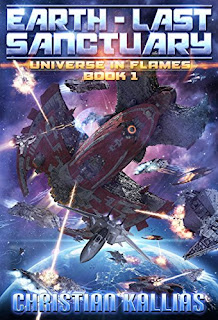 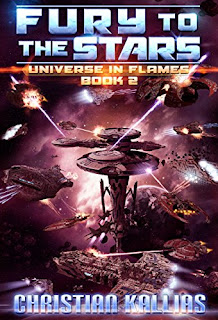 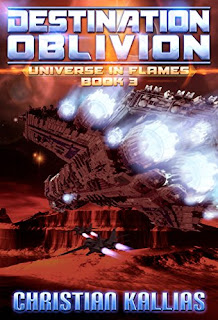 ​The First Universe In Flames Trilogy
​
All rights reserved. This book or any portion thereof may not be reproduced or used in any manner whatsoever without the express written permission of the publisher except for the use of brief quotations n a book review. 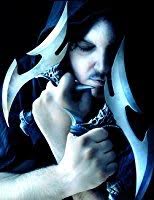 Christian Kallias was born in Geneva, Switzerland. As his surname suggests, he has Greek roots and often dreams of life in Greece. The rest of the time, he plots space operas and fantasy stories at home in Switzerland.

Christian has always been fascinated with space and Science Fiction in general. As a teenager, he was forever imagining stories, enjoying video games, and creating various art projects. With his sight always set towards the stars, his novels reflect many of his favorite things, like Star Wars, Star Trek, Babylon 5, and Stargate. He has fond memories of playing games like Wing Commander, a fact that should be apparent in his depictions of dogfight scenes.

Christian has always been drawn to imagining his stories in which his utopian aspirations for a better world where humanity shines and evolves towards a higher level of civilization often find their way into his novels. After trying to become a mangaka, a video game creator, an illustrator, and a cd cover artist, he realized along the way that the best medium to express himself was simply through the written word.

Christian began his career as a system engineer and understands technology very well even though he's more than happy to never have to fix a server again for the rest of his life! With that old life behind, and now living his dream, he's thoroughly enjoying creating storylines and characters that entice the reader to reflect and to ask themselves what if? What if we did things differently? What if we challenged our beliefs? But he doesn’t imply that he is right with his questioning. He just has these questions and likes to share them with his readers. In the end, Christian writes, first and foremost, to entertain. So for a little while, the reader can be transported to other worlds, and he hopes they enjoy the ride.
Website:www.christiankallias.com
Connect With Christian
Facebook: @ChristianKallias
Twitter: @kalliasx
Blog
Goodread's
Amazon Author Page
Join Christian Kallias' Newsletter

Thank you for joining us today!
We hope you will enjoy this Trilogy!

Posted by Book Lover at 1:23 PM No comments: