Exclusive Pedigree:
My life in and out of the Brethren 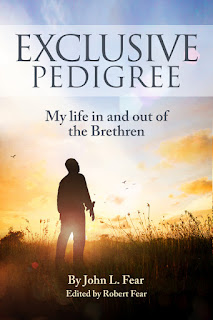 John Fear was born into a religious sect known as the Exclusive Brethren. This sheltered him from the outside world as he grew up, but could not hide him from its influences. A struggle began in his mind that led him to leave the Brethren, along with his young family.

This is a story that was always meant to be told. During his later life John Fear had prepared a lot of the book, along with notes for chapters that he knew would not be completed. It is only now, over twenty years later, that the book is finally being published. It contains original content written by John, along with diary notes, letters and magazine articles. The final chapters are written by his second eldest son, Alastair. The memoir is introduced and edited by his eldest son, Robert, as a tribute to his father’s amazing life.

Recommendation
“Great intro, so much is said in just a few words. The author has put lots of feeling into it too. A quality presentation. Excellent cover, excellent photos, chapter titles and accuracy. Lovely evocative writing.
Well, thank heaven that Robert Fear decided to publish his father's gem of a book! This is not to be missed - I simply couldn't put it down! John Fear certainly had an entertaining command of the English language and tells a wonderful tale of his life.
There is great variety from cosy family memories to horrific scenes in a coup. A variety of techniques are used to portray this memoir - diary entries, a telegram, and letters. I like the travel aspect to this memoir too - I wasn't expecting it.
A fantastic book. A wonderful and powerful tribute."
~Julie Haigh - Top 1000 Reviewer
Read A Sample of This Book on Amazon.com's Look Inside

Who Is Robert Fear? 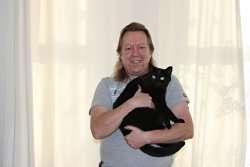 Born in Leicester in 1955, Robert's family moved to Surrey when he was 11. He was educated at Reigate Grammar School. After this he worked in a bank in the city for several years before getting the travel bug. Fred, a nickname he got at school, stuck throughout his travels and has remained with him to this day. His travels took him to Ibitha for the summer of 1977, hitch-hiking around Europe in 1978 and the USA and Canada in 1979. During this time he also settled and worked in Germany. Fred's Diary 1981 was written during the 158 days he spent travelling around Asia.

These days Robert is happily settled in Eastbourne, East Sussex where he lives with his wife and three cats. He works as a software consultant and has been able to combine work with some travel during the past fifteen years, having visited countries as far apart as Australia, Singapore, Ghana and Suriname.