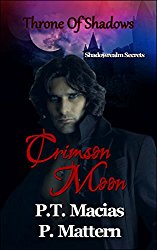 About The Book
In the undulating purple mists of a parallel step realm to Earth lies the kingdom of Shadowrealm. It's noble leaders, the royal House of O’ Oasis, are pledged to protect the earth and its inhabitants.

The night of the crimson moon, Tsar Fredrick O’Oasis is brutally murdered. Shadowrealm lost their Tsar, but his son Alexsander assumes the throne as the Tsar and rightful ruler. Enraged, his younger brother Prince Omar O’Oasis makes a pact with the Dark Amy forces led by the notorious Prime Vice Dark. He has promised his allies and minions the demon born Chupalmas the spoils of the Earthrealm.

Tsar Alexander’s mission is clear, and he travels to Earth to turn away the murderous tide of the invaders, and in the process encounters the one woman on earth destined to bring him to his knees and claim his soul: Nicolette. Beautiful, educated and desperate to solve the mystery surrounding the murderous rampage, she is unaware of having the dangerous target on her back or that she possesses the magic to fight the Dark Forces that seek to enslave her.

A tug of war ensues: Nicolette refuses to recognize her connection with Tsar Alexander, the Chupalmas are closing in, and time is running out.

At the end of the corridor outside, two immense golden moons shine their beams into the torch lit corridor. The Tsar’s private chambers are located at the end of the long corridor. The sound of night birds calls, along with the chant of crickets, serenade him into a deep sleep. The guard sits outside Tsar Frederic’s bedroom door. His head bobs as he nods off.
The silent figure, the Dark Minion Pox, keeps to the shadows that appear along the opposite wall, and pays rapt attention to the guard. When he’s satisfied that the guard is asleep, he quickly reaches out a long, curved talon, and slits his throat. There’s a muffled thud as the guard’s body hits the floor, a momentary gurgling sound, and then silence. Even the crickets stop chirping.
The well-oiled door to the Tsar’s chambers opens silently inward. There’re two huge candles on high wrought iron standing along the sides of the Tsar’s bed. The Dark Prime quickly draws the energy from them, causing the flames to flicker, and then go out.
Some things are best done in the dark. Murder is one of them.
The dark prime creature walks stealthily into the room and looks down at the handsome sleeping monarch. Frederick is still a regal and handsome figure. His beard and hair are flecked with silver, his eyes are closed, and he breathes the deep satisfying sleep of Tsars.
The Dark Prime minion, Pox, inhales all of the oxygen out of the room at once, and Tsar Frederick awakens gasping, his hands at his throat, as he looks up into the terrible and distorted face of the creature. The creature’s eyes are black soulless holes. Its sneering, twisted lips grimace in a wicked smile. Its double rows of deadly sharp teeth shine like ivory needles in the moon ray of the twin moons.
Pox takes no time to strike Tsar Frederick in his bed. He stealthily inflicts the deathly blow, to send him to his death without ever uttering a sound.
The Tsar’s death looks on the surface to be a natural one, but the Dark minion reaches down, and rips the Tsar’s night shirt open. He uses the same talon with the guard’s blood on it to carve a symbol into the Tsar’s chest.
The distinctive symbol shows the Sanskrit symbol for hell: a swastika with four dots on each quadrant. It is the symbol of the Chupalmas, and the creature smiles again as he examines his handiwork.
Tsar Frederick is dead.

Buy the book today for 99cents on Amazon!

See what else PT Macias has available:
http://www.rukiapublishing.com/book-showcase-pt-macias.html