"So many things I loved about this novel!" ~'I Was, Am, Will Be Alice' by @eliseabram~5Star #TimeTravel #Fantasy #lovetoread #RPBP 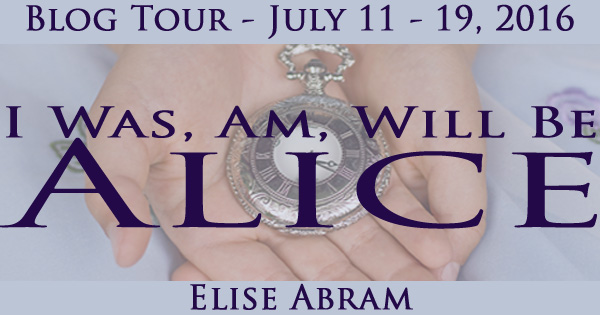 
Pages: 310
Release Date: 12 July 16
Blog Tour Date: 11 - 19 July 16
When 9 year old Alice Carroll disappears during a school shooting she is left wondering if time travel is all it's cracked up to be. 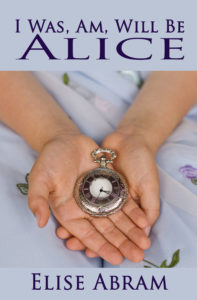 When Alice Carroll is in grade three she narrowly escapes losing her life in a school shooting. All she remembers is the woman comforting her in the moments before the gunshot, and that one second she was there, the next she wasn't.

It's bad enough coming to terms with surviving while others, including her favourite teacher, didn't, let alone dealing with the fact that she might wink out of existence at any time.

Alice spends the next few years seeing specialists about her Post Traumatic Stress as a result of VD--Voldemort Day--but it's not until she has a nightmare about The Day That Shall Not Be Mentioned, disappears from her bed, is found by police, and taken home to meet her four-year-old self that she realizes she's been time travelling.

Alice is unsure if her getting unstuck in time should be considered an ability or a liability, until she disappears right in front of her high school at dismissal time, the busiest time of day. Worried that someone may find out about her problem before long, Alice enlists her best friend (and maybe boyfriend), Pete, to help her try to control her shifting through time with limited success. She's just about ready to give up when the shooter is caught. Alice resolves to take control of her time travelling in order to go back to That Day, stop the shooting, and figure out the identity of the stranger who'd shielded Alice's body with her own. 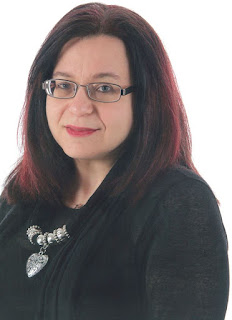 Elise Abram is high school teacher of English and Computer Studies, former archaeologist, editor, publisher, award winning author, avid reader of literary and science fiction, and student of the human condition. Everything she does, watches, reads and hears is fodder for her writing. She is passionate about writing and language, cooking, and ABC’s Once Upon A Time. In her spare time she experiments with paleo cookery, knits badly, and writes. She also bakes. Most of the time it doesn’t burn. Her family doesn’t seem to mind.

Enjoy An Excerpt
Alice is 9

I'm huddled beside the bench in the grade three cloakroom, head scrunched against my knees, hands clasped behind my head. I hear the shots, three of them, and I swear my heart stops pumping each time. There's a woman next to me, kneeling, whispering in my ear, telling me it's going to be okay, but I'm either too frightened or it was too long ago to remember exactly what she says. Her hand grips my shoulder firmly, and there's a familiar quality to her voice that's somewhat soothing. The man's heels clack into the cloakroom and the gun cracks as he readies it for the next shot. The woman stands and I can tell by the air she moves with her that she's taken a step toward him. Her lips make a wet sound as if she's parted them, and she draws in a breath as if to speak, and then the gun booms─it's deafening─and she goes down.

I scream and I go away.

When I come back the woman is gone. So is the man with the gun. The classroom door opens with a whoosh. My breath catches in my throat and my heart thumps in my chest and I hear shoe clacks again…

"Alice?" a man says when the clacking stops. It's loud enough to snap me from my trance. "You're covered in blood! Are you okay?"


The man, Principal Cotton, clucks his tongue and says, "For God's sake, girl, why are you still here?"

I shrug my shoulders. I have no idea.

His shoes click away. When they click back he has a woolen blanket in his hands. I feel the warmth of his body as he nears and the wet warmth of his breath at the back of my neck as he drapes the blanket over me. He's a smoker. I can tell.

The blanket's scratchy, like Daddy's beard on a weekend morning. It starts to slide off me, but I grab as much of it as I can and pull it close.

Mr. Cotton holds his hand out to me. I take it and let him lead me to the office.

By the time my parents come for me, Mr. Cotton has let me get washed up. My clothes are sticky in places where the blood is still wet and hard where it's dried in others. We sit in his office, the four of us around a small, round table. I try to picture us sitting this way in a coffee shop, waiting for the waitress to take our orders. Mom orders a latte, lactose free and with three sugars. Dad orders something slushy. Mr. Cotton looks like a tea man to me. I order something fruity and icy with lots of whipped cream.

"Where did the blood come from?" Mom sniffles. I hate it when she cries.

"We don't know. She seems physically unharmed." Mr. Cotton shuffles the papers on the table in front of him. "I want to give you this." He hands her a pamphlet. "Grief councillors will be here for the foreseeable future to talk to the children who need it, but seeing as Alice was so close to…well, to the action, Post Traumatic Stress is a likely possibility."

Mom gasps. "Oh God!" Dad reaches for her hand. I sit in my chair taking long, deep breaths, willing myself to grow smaller and smaller until I disappear.

"Call this number, Mrs. Carroll. There are councillors there to help you cope, too. Support groups and the like."

Mom reaches for a tissue from the box on the table. She blows her nose, looks at her lap, and continues to weep.

"Thank you, Mr. Cotton," Dad says. He stands up and shakes the principal’s hand. He touches Mom’s shoulder and she stands, too. She nods and forces a smile at Mr. Cotton.

"Come, sweetie," Dad says to me. He takes my hand and pulls me from my chair.

The drive home would be silent, but for Mom’s sniffles and snorts and gasps. When we get there, she announces, "I’m going to lie down for a bit." She smiles at me and says, "You can lie with me if you like, Alice," as an afterthought.

I nod. I don’t feel like being comforted by my mother. I feel embarrassed at losing control. Ashamed at being found by Mr. Cotton of all people, just sitting there, crying like a baby. I want to eat chocolate cake till I puke and crawl into a hole somewhere and die.

I nod and smile in spite of myself and follow him into the kitchen.

Guest Post
~Read-Alikes
My latest novel, I Was, Am, Will Be Alice releases the week of 12 July 16. In the book, 9 year old Alice Carroll disappears from her classroom during a school shooting. She later learns she is able to time travel when under extreme stress, a situation she is determined to learn to control in order to go back to the day of the shooting to save the lives of her teacher and classmates and to discover the identity of the woman who sacrificed herself so Alice could live.

Here are some excellent read-alikes, books with similar themes or in similar genres that have inspired me and my writing, especially with respect to I Was, Am, Will Be Alice. If you liked these books, you are sure to love Alice (and vice-versa):

Life Henry, Alice travels through time, but due to a different genetic anomaly. Also like Henry, Alice's episodes of time travel centre around the most traumatic event in her life - being caught in a school shooting. Unlike The Time Traveler's Wife, Alice eventually learns how to control her traveling and tries to use it to prevent the shooting from happening. The novel is not primarily a romance, but rather, a coming of age story in which Alice learns that the curves life has thrown her do not have to define her. It is about a young girl coming to terms with her disability and using it to empower herself.

Alice in Wonderland by Lewis Carroll

Names and phrases were borrowed from Alice in Wonderland, but aside from my Alice feeling as if she's stepped into the bizzaro world of the looking glass, the story does not compare. I include Wonderland in this list with the hope that it might inspire my readers to go back and take a look at the classic work that inspired me, if not the story.

The Shining Girls by Lauren Beukes

In The Shining Girls, Kirby is the victim of a time traveller. She uses her traumatic event--nearly being murdered by serial killer, Harper--and her job as a reporter, to turn the event around and bring her attacker to justice. Like Alice, Kirby uses the curves life has thrown her to empower herself and overcome her past. In The Shining Girls, it is Harper who does the travelling through a door in a magical house. Kirby is assisted by fellow reporter, Dan, in her investigation and there are hints of a romance, much like Alice is assisted by Pete, and there are hints of a romance.

The Lovely Bones by Alice Sebold

In The Lovely Bones, Susie is raped and murdered. She spends the book in heaven, looking down on her friends and family as her murder investigation unfolds. Susie must come to terms with her death as she hopes her murderer will be caught. As the story progresses, Susie comes of age as she accepts her fate and learns of a clue that has been uncovered that will ultimately lead to the capture of her murderer. Alice is very much alive throughout the novel. The parallel here is the trauma and the need to come to terms with how the character's life has changed as a result of the trauma. As the character comes of age, she learns to use her trauma as a tool for empowerment, rather than defeat.

The Half-Life of Molly Pierce by Katrina Leno

Molly suffers from split-personality disorder. The book opens with a trauma - Molly witnesses a boy on a motorcycle as he is hit and killed in a car accident - and she doesn't know what to make of it. Because life around her goes on and each of Molly's personalities are only aware of half of it, she must learn to overcome her disability in order to figure out who the boy on the motorcycle was, to regain her memory, and to get better. In other words, like Alice, she must also learn to come to terms with her disability, and she eventually uses it to piece her life together, thus empowering herself so she can get well.

a Rafflecopter giveaway
Posted by Book Lover at 11:06 AM

Email ThisBlogThis!Share to TwitterShare to FacebookShare to Pinterest
Labels: "So many things I loved about this novel!" ~'I Was, Am, Will Be Alice' by @eliseabram~5Star #TimeTravel #Fantasy #lovetoread #RPBP